How it all began

“So I’ve been thinking. Who doesn’t love babies? The answer is no one. Everyone loves babies. And I’m pretty good with this camera, so I thought, why not take pictures? Of babies. I know, right? It’s a good idea. But then I got to thinking more. What else do people like? Cute animals, flowers, bumblebees. That’s a universal list of things people like. They’re all such cute things. So since babies are really cute, and other things are really cute, we’ll dress the babies like other cute things. So it’s double the cute.

The babies will probably cry, but really, who cares? People will have pity on them, and think they’re even cuter. Uteruses all over the world will groan. Because crying babies really does something to your ovaries. I think it’s a fact or something. Crying babies dressed as cute things.

If I’m dressing up a baby like a flower, it won’t make much sense to just have the flower sitting there on the ground. That’s absurd. So we’ll shove them in pots. The babies, I mean. It’ll be adorable because babies don’t go in pots, am I right?

Why stop there? Why not shove babies into other things they’re not supposed to be shoved in? Pumpkins in the fall! Eggs at Easter! Presents at Christmas time! Maybe we could make a Menorah but with babies. Seven Jewish babies! We’ll put the babies in nets during lobster season to appeal to the coastal regions, and then we’ll just put them in a pile of snow for everyone up in Canada. We’ll put babies in the oven and babies in pots on the stove. OH OH! Babies in the refrigerator. That’s adorable. Maybe put a baby on a roof somewhere? Or in a trunk. Or what about on a bun on the barbeque? OH MY GOSH YOU GUYS. Babies don’t belong on barbeques! If we get bored of those, we can try shoving babies into one of the following: coffee pots, space ships, holes in the ground, barrels, horse troughs, toilets, fuzzy Russian hats, garbage cans, washing machines, glove compartments. The possibilities are endless.

This will start a revolution! Every parent everywhere will want to start shoving their baby into stuff, too. It’ll take over until parents sit around and ask themselves if they’re a good parent even though they didn’t put their kid in a pumpkin this Halloween. It’ll take over like an epidemic. I’ll be rich. My pictures will be on calendars and bookmarks and coffee cups. I can’t believe no one thought of this sooner.

Babies. Let’s put them in stuff.” 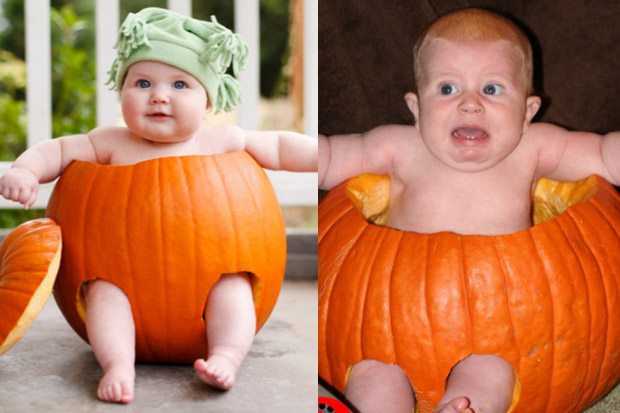